We started day 2 by waking up early and taking a quick stroll around Yerevan, which by the way is a brilliant idea! The Republic Square tends to be a little crowded from 9am. Getting up at as early as 6 was a wise decision as we were able to take photos of the museums and the whole of Republic Square at its quiet moments.

*If you wanna skip the talking, you can check my photo gallery through this link: ARMENIA ♡

We booked a morning tour at 10am with Armenion to one of the top pick destinations in Armenia. The Geghard Monastery and Garni Temple. Tip: It’s better to book a tour in advance to skip the hassle of having to make decisions while you’re already in your trip. You may check Armenion through this link: Armenion Tour Service. It was a private tour to Geghard-Garni and we were expected to return to the city by 3PM.

At night, you can visit the Republic Square for a dancing fountain show! 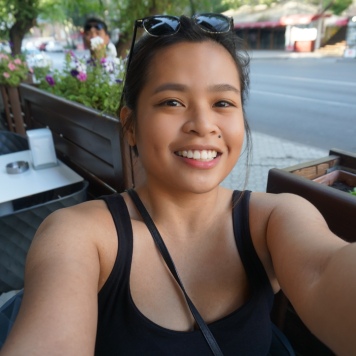 To fuel our bodies, we went to this breakfast place. For 15USD each we got these bagels, croissants and juices.

You can check their menu through this link:

✆  +374 11 202299
If you have a tour in the morning and finding a place to eat, this is one of the few open ones at as early as 7am. Just a few blocks away from Republic Square too. After which, we were then picked up by Hrant and Irvin our tour guides from the restaurant. First stop at Garni Temple.
Luckily, we had the temple all to ourselves for a few minutes. The view was exceptional. Before Christianity was born in Armenia, they worship pagan gods. The temple was built for a son god which was converted to a royal summer house by the King’s family. 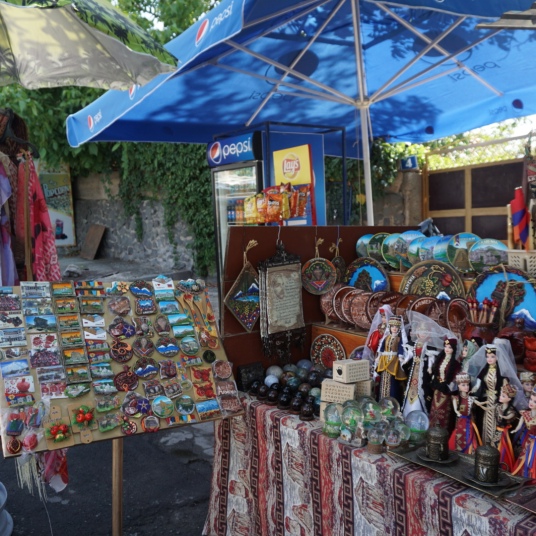 Irvin and Hrant, our guides, were kind enough to buy us this giant bread, which is called “Gata”. It’s sweet and soft and one of the must-try food in Armenia. Outside of Garni also, there are souvenirs which are way cheaper than the other touristy spots. We bought a few fridge magnets to take home to our friends.

Next stop is at Geghard Monastery, where you can find a sacred spring inside. It’s just a few minutes ride away from Garni temple, which is why if you seem to notice they are always paired together for tours.

We spent longer here than in Garni, we went up but not so high by following a short trail to what was believed one of the caves where men lived. I didn’t take much time to take photos anymore hence, showing you this view of the Geghard and the mountains around from the road. 😛

Must-try candies outside. Be careful though, they’re not as chewy as how they look like but they sure are tasty.

Our additional stop was at the symphony of stones.

It stands nearby a river. The way to get here is kinda rough so be prepared. The world we live in is full of wonders.

And since we were able to finish early, we asked the Armenion team to drop us at the Republic Square. Thank you, Irvin and Hrant. 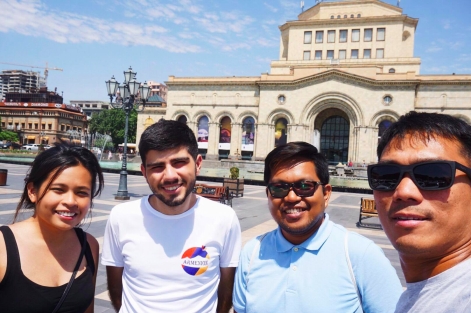 We wanted to buy cheap souvenirs so they recommended this market near the square. It’s called, Vernisagge. The literal meaning of Vernissage is a private viewing of paintings, though there were some paintings being sold at the market, the spot was really intended for shopping for souvenirs. It’s nice to take a short walk from the square to vernissage because you’ll be able to see around the city as well.

Cheap finds! Fridge magnets are around 5 pcs for a thousand AMD. Shirts are prices at 3000AMD. 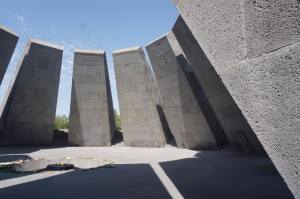 After buying stuff we impulsively rode a taxi and headed to the Genocide Memorial Complex located in Tsitsernakaberd. The place obviously was built to commemorate the lives lost during the Ottoman Empire. People came by to offer flowers and candles. Thousands of people died and this place is where solemnity is observed. Admission is free. 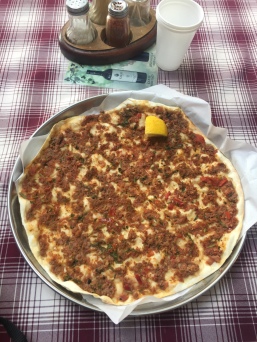 We went home for a quick shower after a hot tiring day and headed quickly back to Yerevan for pizza. I won’t lie, we were expecting to eat at a place recommended by our tour guides for Dolma. I have tried homemade Dolma by my previous boss. And the rich taste of the lamb meat and grape leaves just left a mark on my soul. Chos. But the place ddn’t have Dolma at that time 😦 So we took a stroll again and searched for local Pizza.

Though I didn’t get my Dolma, it wasn’t a bad choice to go to this restaurant.

✆  +374 11 202299
We had two different types of Lahmajoon, one cheesy and one just the usual pizza. It’s a must-try Armenian pizza!!! Pair it with a Kilikia local Armenian beer and I bet that’s enough for a merienda.
It’s a good decision we wore slippers for our afternoon stroll. We were just randomly taking pictures of the city and people, while I hold a beer on one hand. 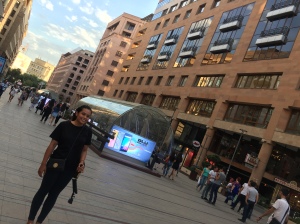 Since it was our last night, we’re making the most out it in the city. Just a few drinks and a view of hot women. By the way, if I haven’t mentioned it. Armenian women are so beautiful! Can’t take my eyes off of them.

Really not a fan of this sort but there’s just something inside that tells me it’s impossible to miss out on the dancing fountain before we head back to the hotel to fix our stuff. So you should too. Expect it to be crowded but there will be traffic control so there’s no reason to be worried. 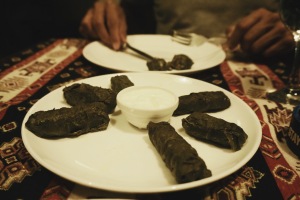 It’s funny that just right in front of the hotel we’re staying in, which is by the way also owned by the hotel owner was a restaurant serving Dolma. So hurray!!! For less than 10000AMD, you have these. I wish I was better at taking photos but when you’re hungry, who gives a..?

So to sum it up, Armenia was the breather I wanted since my last break was when I last went home to Manila in February. I needed a break and so it was given. It just takes a few researches for you to have a hassle-free travel. But its good to get lost along the way too, cause this is how you discover more about the place and interact with the surroundings. I’d definitely consider going back since being in Doha it’s merely a 3-hour flight that skips the hassle of having to travel long and arriving tired and having a few hours wasted for trying to adjust. I love beer, Armenia loves beer so I think you see the connection right there 😉 Hahaha.

Let me know if you plan to visit and whether you’re going to be needing help with a few guides. But my advice would be, discover the place, people and its history. Lose track of your guide even. That’s what makes it exciting. 🙂

We also came across this Saint Astvatsatin Church in Yerevan, so if you want to skip the hours of coaster rides, you can visit this and observe their traditional ways inside the city. 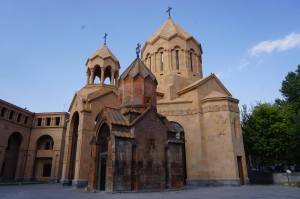