What really happened in Busan?

Just a brief explanation of what brought me to Busan. My dragon boat team, Masterpiece  has registered to the 7th Busan Open Korea Dragon Boat Festival since June this year. The team has prepared for the battle that was set on September 1-2. At first, I was unassertive with joining but eventually by end of July, I have finally committed to train until the race day. I know that’s something not to be proud of — being hesitant, but at that time I wanted to try different things but still ended up committing to dragon boat so yey!

Day 1: Incheon to Busan by KTX

How we got there

Most of the team went with PAL on a direct flight to Busan while my family went later on August 31 to Incheon. We arrived at 1700H, Incheon airport and we still had to take a 4-hour trip by KTX.

Few tips, cause man you got to do a thorough research on this.

Many people were asking ‘What really happened in Busan?’ So this post is addressed to that question. By the way, I’m making a separate post on the food that left a mark on my heart and soul so stay tuned. Lol. 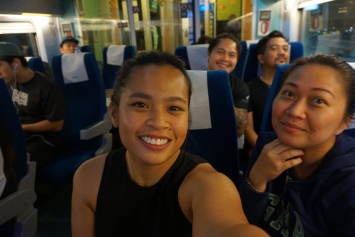 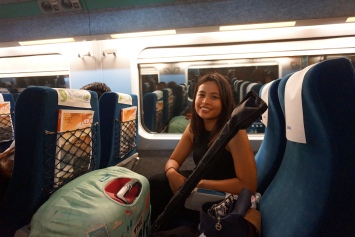 I know we’re all familiar with the movie Train to Busan, aside from it showing profound love of a father (LOL, rly tho) it’s also creepy with all those zippy zombies chasing after them. So this is a photo of my sister and I tryna imitate them and also trying our best to be funny. Be merciful and give off a funny little snort.

We arrived at 0100H (August 31), as expected we were dead tired having to travel from Incheon to Busan so we were excused from the early land training (hereinafter referred to as LT, lol) of the next day.

We stayed in Seacloud hotel, which was part of the registration fee we paid. It covers up until the race is over. The hotel was located near Haeundae beach. We skipped the LT at 0400H and woke up 0700H for breakfast. While the rest of the team was recovering from the LT, we were still adjusting and we needed this to fuel ourselves for the afternoon boat practice at the actual race course.

Here’s view of the beach from our room.

The transpo from the hotel to the race course was also included. 10 minutes away from the hotel, we arrived in Suyeong river for our scheduled practice. You may find this funny and I do too but I feel like it’s more of being bold and courageous. We didn’t have a boat to rent almost 2 months prior to our race date. Imagine a dragon boat team without a boat? How did we manage? You’ll see more of this as long as you still have the patience to read. 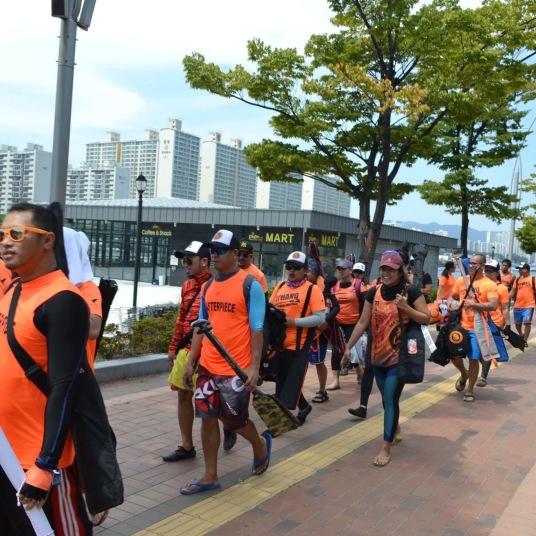 All of us were feeling giddy. A few in our team have experience this but Masterpiece is composed mostly of paddlers who have only been involved in this sport here in Qatar. This is our first time in such a big event and it was a mixture of scared, nervous but yet excited! And though, we were unable to make ends meet without having a boat to train in, this was our time to shine!!! 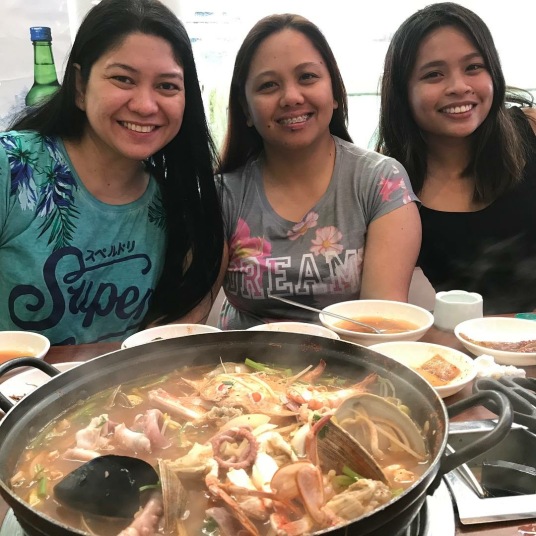 I honestly don’t know where but there’s a street where you can find fried street food then on the other a street where it’s all seafoods. Forgive me cause I didn’t get the chance to review about Korean characters 😛 But anyway, SEAFOOD FEST!!!

You know that old joke about being on a seafood diet? When I see food, I eat. That’s the kind of diet I’m having.

A team that trains together, eats together!!! Being 31 present at that time, spending roughly 500USD I guess wasn’t so bad. Or not.

Since we also have different preferences on food, we had that early dinner as a team but still made room for food we were craving for. I know I said, I’m going to be writing about it on a separate post but man, our Korea trip was mainly focused on food. Funny how we all worked hard to shed pounds prior and then… you know have it all back in a span of 4 days. 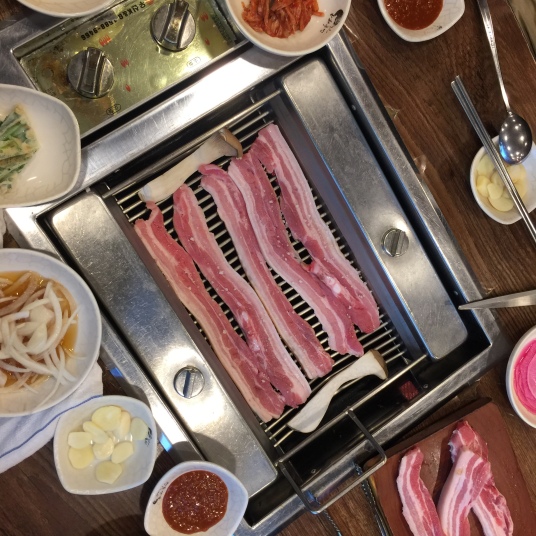 PORK BELLY, GUYS. Guess we really don’t have to argue on this. Finally pork in my mouth. This is popularly known as Samgyupsal. A must-try. I regret writing about at midnight. Price ranges at 15USD pp includes drinks, rice and Samgyupsal

What really made me excited is the fact that it was a first time for MP to form a women’s team. I didn’t take photos or videos and fully relied on official photographers and to my teammates who were not lined up for that day.

I was on the boat for 8 heats. 8 heats, people. And the race started with Women category. I mean, I know other people had it more than I did. But I’ve never felt so alive. I had used all my energy for the team. And though we only placed 6th out of 20 teams from different countries all over the world, the experience itself is something I’ll always cherish. It may have not been caught on cam but my favorite part was when all teams were finished, and us being included in the last heat, we were one of those who went back to our tents last. But it wasn’t a sad walk back to the tent and was actually when I felt most alive, forgetting how tired I was as we were not lucky enough to get in from first heat causing us to repechage. The teams lined up and though not all of us understood each other, it didn’t need subtitles or understanding, we were all ‘high-fiving’ each other, cheering on, congratulating, thanking one another for a fight well-fought. I don’t know with others but that was my favorite.

I’m personally a competitive person and it kinda stings that we didn’t bag any trophies or medals, but I enjoyed it. I don’t know how long I’ll be a paddler in this lifetime but one thing’s for sure, being part of the 7th Busan Open Korea Dragon Boat Fest was enough for me to humble myself. God knows what our team went through. And I know it’s not just us who face problems, but God really tested us on this. 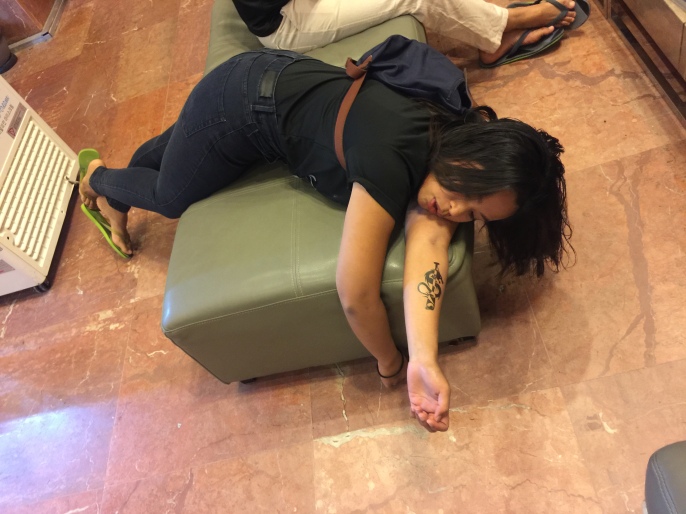 That, my friends is a picture of how alive I was. Of course, I was just trying to make you laugh. Look at my sticker tattoo as well.

I was not able to take pictures of my food anymore. But this was what I had mentioned about the plate full of chicken wings, which I shared to everyone who wanted too. HAHAHA. I had spent 20USD for my food, includes drinks and rice. A rice person.

This night was a night to remember. I cannot elaborate anymore. But this experience taught me a lot in my life. No matter how much we push things to happen or how carefully we plan things bit by bit, unexpected things happen. We are not in control of everything.

If you’re here on this post hoping to know the truth of what really happened in Busan despite of all the things you’re hearing, the only truth that’s going to come from me is that what ever happened in Busan, Masterpiece worked hard for it to be still present today before you. 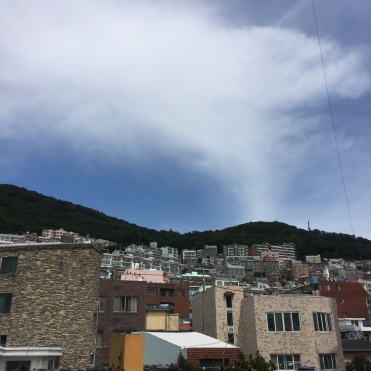 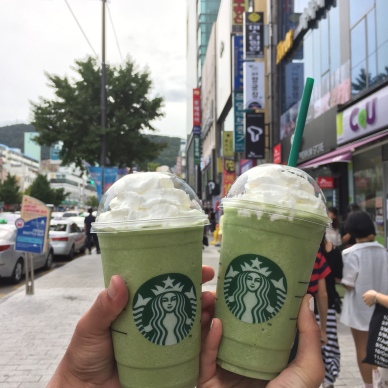 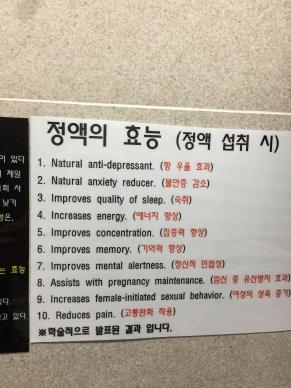 That’s all there to say about day 4. 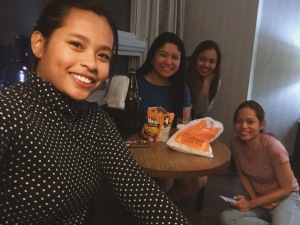 It should be obvious by now that I have a serious thing for beers. This is the dream team, my friends. Nothing more but good vibes with these people. ♥

Train ride yet again and food tripping while waiting for our flight. And also with a hint of losing my boarding pass and having my name announced as it was found. Embarrassing.